Darnell had a fantastic time at the Derby County match on Saturday after winning a prize through our school breakfast club. 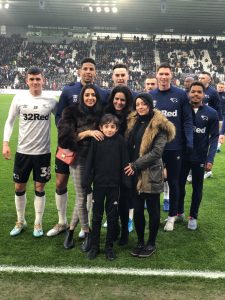 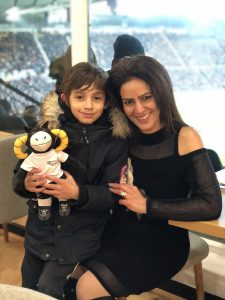 Darnell enjoyed a kick-about with Derby County mascot, Rammie, on the pitch before the match before having pictures taken with the team during their warm-up.

He then came out of the tunnel at the start of the match with the players as Rammie’s assistant and managed a high five with Wayne Rooney who also attended as coach.

Kavita won the VIP experience at a charity auction earlier this year and wanted to give it to one of more than 350 children who benefit from a healthy meal thanks to Breakfast Club.

The owner of Oberoi Business Hub, instigated the Breakfast Club to ensure no child in Derby goes to school hungry after being astounded by the high number of children who go to school without food across the city.

She said: “A bowl of cereal for one child every day of the school year, costs us just £15 because the charity His Church only charge us distribution costs after accessing the cereals from the big brands.

“Scientific research proves that children’s ability to learn improves if they eat breakfast because their bodies are properly fuelled in the morning.

“With nearly 100 children now eating a healthy early morning meal there, Firs Primary School benefits more than any other from Breakfast Club and its children were asked to draw a representation of what the club meant for them.

“Darnell was judged the winner so it was a thrill for myself and daughter Leena, who is a Derby County fan, to be able to give them a very special treat as their prize.

“Breakfast Club is entirely funded by city businesses so we would appeal to even more to help so more children can have something healthy to eat at the beginning of the day.”

Headteacher, Paula Martin, said: “We are delighted to work with Kavita to provide breakfast for so many of our children.

“Coming to Breakfast Club gives children a more settled start to the day and helps them concentrate on their learning once they go into class.

“Breakfast Club also helps some of our families, for whom poverty is a daily reality.  This makes a huge difference to the lives of our children.

“Having the opportunity to take part in the competition was an added bonus for us and Darnell and his mum had an amazing time at the Derby County match.”

Derby County Community Trust has been a key supporter of Breakfast Club and its Head of Community, Simon Carnall said: “It was great to welcome Darnell, Leonie, Kavita and Leena at the QPR fixture.

“Breakfast is such an important part of preparing young people for the school day and we hope to be able to continue to work with Kavita and local businesses to spread the club to more local schools.”